Raj Rewal is an Indian architect and urban design consultant who studied architecture in New Delhi and London. Rewal worked in Michel Ecochards’s office in Paris before starting his practice in New Delhi.

His humanist approach to architecture responds to the complexities of rapid urbanisation, the demands of climate, cultural traditions, and building crafts and technologies. His built works comprise a wide range of building types, including the Nehru Pavilion, the Scope office complex, the Central Institute of Educational Technology, the World Bank building, the National Institute of Immunology, the Parliament Library, and the Asian Games Village, all located in New Delhi, India, as well as the Ismaïli Centre in Lisbon, Portugal.

Mr. Rewal’s works have been widely exhibited and published, with monographs in English and French; his most recent publication is entitled Humane Habitat at Low Cost. Mr. Rewal was a professor at the New Delhi School of Architecture and Planning, and has taught and delivered lectures at universities in Asia, America, and Europe.

“Some Eastern architects are exploring ways to merge traditional architectural forms and modernism. One such attempt is Rewal’s use of handcrafted stone grills, or jalis. In precolonial Indian architecture, jalis were used for decoration and to separate the outside from the inside, to diffuse the harsh sunlight, and to visually and audibly connect two spaces while physically separating them.

“Sadly, the lack of patronage for Indian craftsmanship by the British during their nearly 200-year colonial rule almost destroyed the rich tradition. Rewal has introduced craftsmen to modern tools and chemicals hoping that they will revive the tradition. In the Parliament Library, jalis are integrated artfully, creating a typically Indian look.

“Rewal’s search for a contemporary Indian identity does not stop there. The building typology and the spirituality associated with the mandala are quintessentially Indian. He has created contemporary Indian architecture that uses innovative technology to express both modernity and regionalism with connections to the physical surroundings and to a venerable history. ”

“Drawing on earlier urban housing models, Rewal’s Asian Games Village in New Delhi used a network of streets and squares with vehicular access at either end of the site. Its morphology resembles a traditional village, with cubic solids and voids that are characteristic of the Indian urban fabric (compare with cities such as Jaisalmer Old Delhi). They offer shade and yet remain vitally alive to the pressures and pleasures of the people who live there. Entrance gateways with linked upper terraces punctuate the sequence of courtyard and garden spaces.”

the library is a fine example of postcolonial Indian architecture. It displays high technology with a regional expression, it is modern yet rooted in precolonial history, and it responds thoughtfully to its challenging colonial and political context.

The library is adjacent to the Indian Parliament building, which is a key element of the colonial plan of the city of New Delhi. Designed by Edward Lutyens and Herbert Baker in the first half of the 20th century.

Rewal was asked to make the new building harmonious with its context. That meant blending with the strong imperial representation and with a sacrosanct environment that is symbolic of the highest political ideals of today’s Indian state. At the same time, his design was to represent a free, independent, and modern country.

To give the library an identity of its own while respecting the Parliament building, Rewal says he drew on Indian history and likened the relationship between buildings to the traditional relationship between guru and king. A guru acknowledges the power of the king — neither confronting nor submitting — and retains the strength of his integrity as a sage.

Also, the exterior walls of the library are clad in the same red and beige sandstone as that used in the Parliament building. This local stone has been used extensively in northern and northwestern India through the centuries and therefore expresses regionalism. In these two decisions regarding height and materials, the guru acknowledges the power of the king. But the guru’s wisdom and integrity are demonstrated in the architecture of the library.

The plan of the building is inspired by precolonial Indian architecture such as the magnificent Taj Mahal, with its square base and symmetrical composition.

The plan of the richly adorned Datia Palace (1614 A.D.) in central India is said to be reminiscent of the ancient Indian mandala. The mandala has deep existential and spiritual meaning and is said to be used in temple architecture to achieve a spiritual experience of one’s connection with the cosmos.

Another inspiration is the Adinatha Temple (1439 A.D.) at Ranakpur in western India. Adinatha is square in plan, with cardinal axes meeting at the center, leaving open-to-sky courtyards in the leftover spaces. In addition to being icons of Indian architecture, courtyard plans admit daylight and have social and climatic advantages.

Historically, Indian buildings with interior open-air spaces helped in defense. But for Rewal, in a library that needs neither defense nor ceremony, such forms seem to symbolize an introversion characteristic of the ancient Indian guru.

Located on a 10-acre (4-hectare) site, the library is nearly 590,000 square feet (55,000 square meters) in area and can accommodate three million volumes on the two basement floors. It has hi-tech networks and facilities for microfilm, multimedia, and satellite links.

Site conditions and trees prohibited the northwestern corner of the plan from being built, leaving the square incomplete. Otherwise the plan, with its courtyards and axes, is similar to historic precedents.

The full-height central core of the building, formed at the point of intersection of the two axes, houses the reading room for members of parliament (MPs), the research area and archival storage, committee room, and a banquet hall. Beyond this central core are the courtyards, and further beyond are separate entrance lobbies for MPs, scholars, and the public.

The corners of the incomplete square and the nodes formed at the ends of the axes are designated for various functions. The axes and the sides of the square form corridors and outline the courtyards.

Each courtyard symbolizes one aspect of the Indian constitution. One is an amphitheater, symbolizing freedom of expression. Another courtyard has a pool of water symbolizing equality. A tree forms the focal point of the third courtyard, representing social justice.

The domes are perhaps the building’s most significant feature. Several domes of different sizes and types make up the roof and benefit from Rewal’s experiments in earlier buildings.

The central dome, spanning 82 feet (25 meters), is entirely of glass that was specially developed for this building. The intense heat and glare of New Delhi, with summer temperatures rising to over 110 degrees Fahrenheit (43 degrees Centigrade), make conventional glass impractical for skylights.

Yet Rewal insisted on using glass to let in light. Conventional reflective glass reduces glare and heat build-up, and this specially developed glass is claimed to be still more efficient in resisting heat transfer. The result: almost magical views of the blue sky, of the sun minus its heat and glare, and of the seasonal monsoon clouds.

This dome reminds you that you are standing at the intersection of the building’s two main axes. The point of intersection projects up in the dome in the form of two bands formed by the structural frame for the glass panels. The remainder of the dome consists of a lattice of structural frames held together by a network of steel cables converging at key tension nodes.

Other domes are made of thin fiber-reinforced concrete shells, sometimes with inset glass panels. Tensile forces are transferred through tubular steel members.

Other structural elements of the building are of reinforced concrete. The slabs are coffered to support long spans. The diaphragm walls and the foundation slab of the underground structure resist inward and upward pressure from the water table through anchors into the surrounding soil and the rocky substrate.

The project provides housing for the service personnel of the French Embassy. The units are arranged in clusters of eight; three each on the ground and first floors, and two on the second. All entries are from pedestrian streets. The units vary in size from 600-800 square meters and contain a private courtyard and an outdoor living room for traditional customs and ceremonies. Narrow streets, shaded and active, are broken into a visually comprehensible scale and are connected by open spaces. It is constructed using load bearing brick walls supported on concrete slabs and detailed with timber.

Administrative, design, financial services, and public relations offices for a public sector organisation housed in a 14 storey building. The concept is based on four cores, containing lifts, staircases and services, resulting in a large hall in the middle for flexible office planning. These cores also form major structural elements and along with four central shear wall support an average office floor of 54m x 24.6m.

The primary function of the institute is scientific research. The programme contains laboratories, study rooms, a library, auditorium, a director’s house and lodgings for professors with families, married assistants and unmarried researchers. Each of these dwellings is in its own cluster close to the entrance of the site. The central building also acts as a gateway and its axis corresponds with the main spine of the scheme. Rewal conceived the ensemble as an analogue of a traditional town with courts, galleries, level changes and a uniform use of materials and colours.

The Hall of Nations and the Hall of Industries , New Delhi 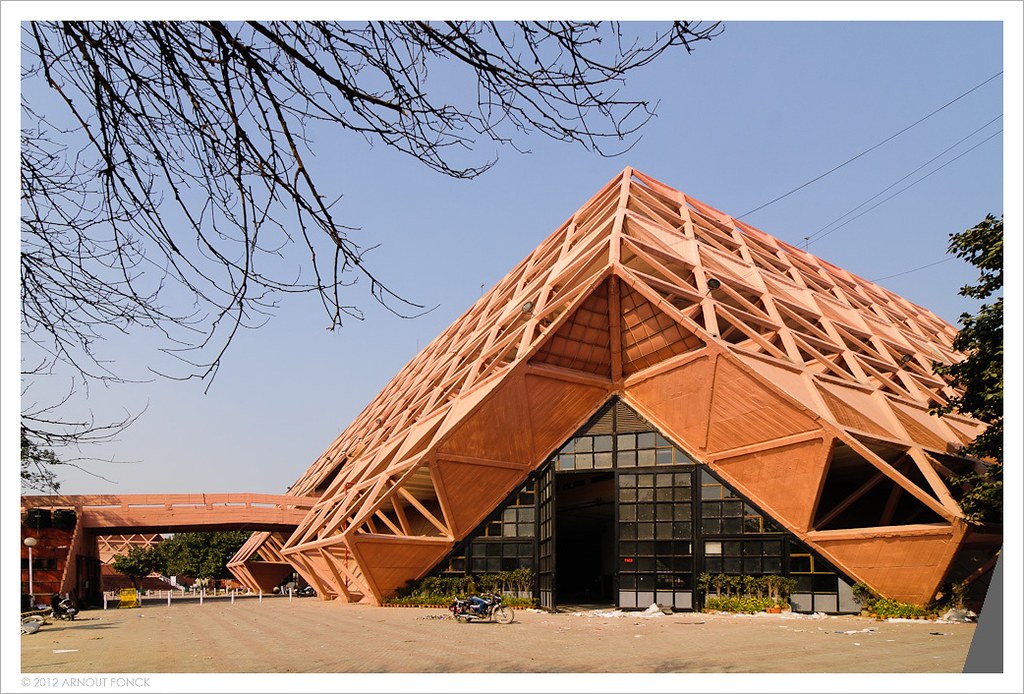 The Hall of Nations , New Delhi

The Hall of Nations , New Delhi

A perseverant and passionate person creating a knowledge sharing culture .